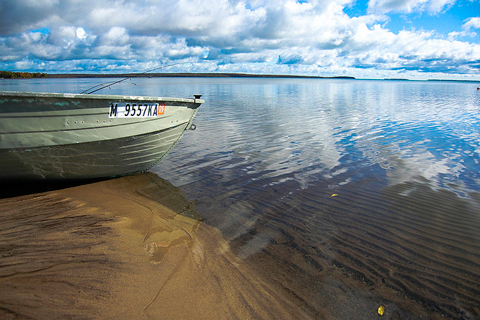 We can’t afford to add the risk of radioactive contamination to one of the world’s largest sources of fresh water. (Credit: Charles Dawley via Flickr)

Is dilution really the solution to pollution — especially when it’s nuclear waste that can stay radioactive for 100,000 years? A four-member expert group told a federal joint review panel it is.

The panel is examining an Ontario Power Generation proposal to bury low- and intermediate-level nuclear waste from the Darlington, Pickering and Bruce nuclear plants in limestone at the Bruce site in Kincardine, beside Lake Huron. According to the Toronto Star, the experts reported that 1,000 cubic metres of contaminated water could leak from the site, although it’s “highly improbable.” But even if it did leak, they argued, the amount is small compared to Lake Huron’s water volume and the quantity of rain that falls into it.

If the materials were instead buried in Canadian Shield granite, any leaking waste would be diluted by active streams and marshes, the experts claimed: “Hence, the volumes of the bodies of water available for dilution at the surface are either immense (Great Lakes) or actively flowing…so the dilution capacity is significant.”

Others aren’t convinced. The Stop the Great Lakes Nuclear Dump group has more than 62,000 signatures on a petition opposing the dump. Many communities around the Great Lakes, home to 40-million people, have passed resolutions against the project, including Canadian cities Toronto, Mississauga, Hamilton, Niagara Falls, Kingston, Thunder Bay, Sault Ste. Marie, Windsor and more, and local governments in the states of Michigan, Illinois, Pennsylvania, Indiana, Minnesota, Wisconsin, New York and Ohio. The United Tribes of Michigan, representing 12 First Nations, is also opposed.

Michigan’s Senate recently adopted resolutions to urge President Barack Obama, Secretary of State John Kerry and U.S. Congress to intervene, and for the International Joint Commission, the Great Lakes Commission and all Great Lakes States and Ontario and Quebec to get involved.

According to Stop the Great Lakes Nuclear Dump, burying such highly toxic wastes in limestone next to 21 per cent of the world’s fresh water “defies common sense.” The group’s website notes, “There are no precedents anywhere in the world for burying radioactive nuclear waste in limestone. The repository must function to safely contain the nuclear wastes for over 100,000 years. No scientist or geologist can provide a 100,000 year guarantee.” The Great Lakes are only 12,000 years old!

On top of that, retired Ontario Power Generation research scientist and chemist Frank R. Greening wrote to the review panel stating that OPG has “seriously underestimated, sometimes by factors of more than 100” the radioactivity of material to be buried.

Greening says the company acknowledged his criticism but downplayed its seriousness, which he believes raises doubts about the credibility of OPG’s research justifying the project. “Their response has been, ‘Oops we made a mistake but it isn’t a problem’ and that really bothers me as a scientist,” he told Kincardine News. “It is rationalizing after the fact.”

According to the newspaper, “a radiation leak at a nuclear waste site in New Mexico — cited by OPG as an example of a successful facility — is further fuelling criticism of the project.” In February, radiation was detected in vaults and in the air a kilometre from the U.S. Department of Energy’s Waste Isolation Pilot Plant near Carlsbad, where radioactive materials from the nuclear weapons program are stored. The facility, the world’s only deep geologic repository, had only been in use for 15 years and is closed for now. The cause of the leak isn’t yet known.

Those and other factors led the joint review panel to re-open hearings beginning September 9. They initially ended October 30, 2013. A federal cabinet decision is expected sometime next year.

This “out of sight, out of mind” mentality must end. We can’t continue to dump garbage into the oceans, waterways and air or bury it in the ground and hope it will disappear. If we can’t find better ways to use or at least reduce waste products, we must stop producing them.

In the meantime, this project must be halted. The Great Lakes are already threatened by pollution, agricultural runoff, invasive species, climate change and more. We can’t afford to add the risk of radioactive contamination to one of the world’s largest sources of fresh water.