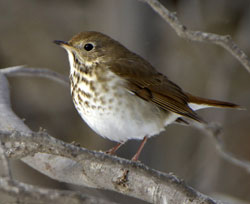 Toronto – Following a century-long tradition, some 60,000 birders will venture out across North America to participate in the single longest-running and most popular wildlife census in the Americas between December 14, 2012 and January 5, 2013.

Not only is it a great opportunity to get outside with friends, this volunteer initiative gathers indispensable data revealing trends in bird populations.

In Ontario alone, there are more than 120 registered counts this year, with Ontario Nature member groups organizing nearly half of them.

The hordes of citizen scientists will venture out to 24-kilometre diameter circles as far north as Thunder Bay, Ottawa to the east and Point Pelee to the south. The counts are conducted over a 24-hour period and volunteers are assigned specific routes.

Christmas Bird Counts have always been open to birders of all levels and, starting this year, there is no fee to participate.

The data collected allow researchers and conservation organizations to study the health of birds across North America. Armed with this information, groups like Ontario Nature can set priorities for bird conservation.

Counts in the 1980s revealed a drastic decline in the number of American black ducks, triggering much-needed conservation initiatives.

“With the Christmas Bird Counts, citizen scientists are effectively tracking bird populations and ranges,” says John Urquhart, Ontario Nature’s conservation science manager. “This is a cost-effective way for conservation organizations to identify trends so we can undertake conservation work where it’s needed most.”

The Christmas Bird Count tradition dates back to 1900 when American ornithologist, Frank Chapman, suggested an alternative to the once popular annual Christmas hunt where teams competed to see who could shoot the most birds and small game. Chapman proposed that people record — rather than shoot — birds. That first year, 27 people counted birds at 25 locations.

The idea took off and there are now close to 500 counts across Canada with each province and territory represented. The number of participants continues to grow year after year. Last year, an astounding 63,000 volunteers counted more than 60 million birds.

Bird Studies Canada coordinates the count in Canada in collaboration with the National Audubon Society.

For a full list of the Ontario Nature member groups that are holding bird counts and when, please visit www.ontarionature.org/cbc.