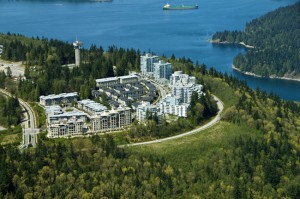 UniverCity at the top of Burnaby Mountain, in BC. (Image from UniverCity)

Burnaby – SFU Professor Mark Roseland, the sustainability guru who 20 years ago revolutionized the global conversation about environmentally sensitive community planning, has rewritten his landmark text on the topic, using UniverCity and five other communities as exemplary case studies.

In 1992, the year of the first Earth Summit in Rio de Janeiro, Roseland first released his classic book, Toward Sustainable Communities: Resources for Citizens and Their Governments. Now, he is returning to Rio, figuratively and literally, using the 2012 Rio+20 Earth Summit (June 20-22) to release a comprehensive revision of the book that includes the best examples of sustainable community development from the intervening years.

“When I wrote the first edition of Towards Sustainable Communities in 1992, the first Rio Earth Summit had just happened and the kinds of initiatives I profiled were relatively rare,” said Roseland. “While drafting this edition, it became clear that innovations for sustainable communities are now happening so quickly that one book can’t begin to cover them all.” The SFU professor, author and consultant offers a host of UniverCity examples among what he described as the kinds of proven, adaptable initiatives already making communities of all sizes more sustainable, including:

Professor Roseland will also be in Belo Horizonte, Brazil for the Third International Urban Research Symposium of ICLEI: Local Governments for Sustainability (June 14-17), where he
plans to introduce international audiences to Pando | Sustainable Communities, a new online network that facilitates collaboration and knowledge-sharing among researchers, practitioners and government decision-makers focused on cultivating communities that are vibrant, caring, economically resilient and livable places to live.

“This is a perfect illustration of the positive impact that an engaged university can have on the communities it serves,” said SFU President and Vice-Chancellor Andrew Petter. “Once again, we are flattered to be included so prominently in his new text and certain that it will become a bible for our own future efforts – as for everyone who is working to make the world’s cities more sustainable.”