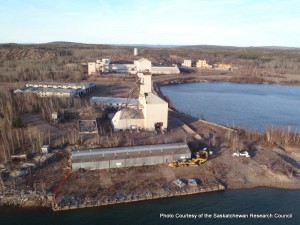 Saskatoon – Hidden in the rugged beauty of northern Saskatchewan, near Lake Athabasca, lie remnants of long-abandoned uranium mines and mills.

As part of Earth Day activities, Saskatchewan Research Council (SRC) is leading an initiative that aims to clean up 38 abandoned, uranium mine and mill sites in northern Saskatchewan. The effort, called Project CLEANS (Cleanup of Abandoned Northern Sites), focuses on removing mining debris and restoring the land for the safety of the surrounding communities, environment and wildlife.

You can view the project in action on Youtube below:

Located near Uranium City, in the province’s northwest corner, uranium mines and small prospecting sites were developed and operated by private companies during the 1950s and 1960s. These exploration sites and mining operations were later abandoned with little consideration to environmental protection or aesthetics.

While interest in the area’s mines has faded, more than 50 years of mining debris continues to pose a risk to the local population and the environment. SRC is working to reduce that risk. In 2010 alone, SRC disposed of more than 1,500 cubic metres of debris found at the satellite sites; more than half the volume of an Olympic-size swimming pool.

This site uses Akismet to reduce spam. Learn how your comment data is processed.